Where’s the super power of hemp? 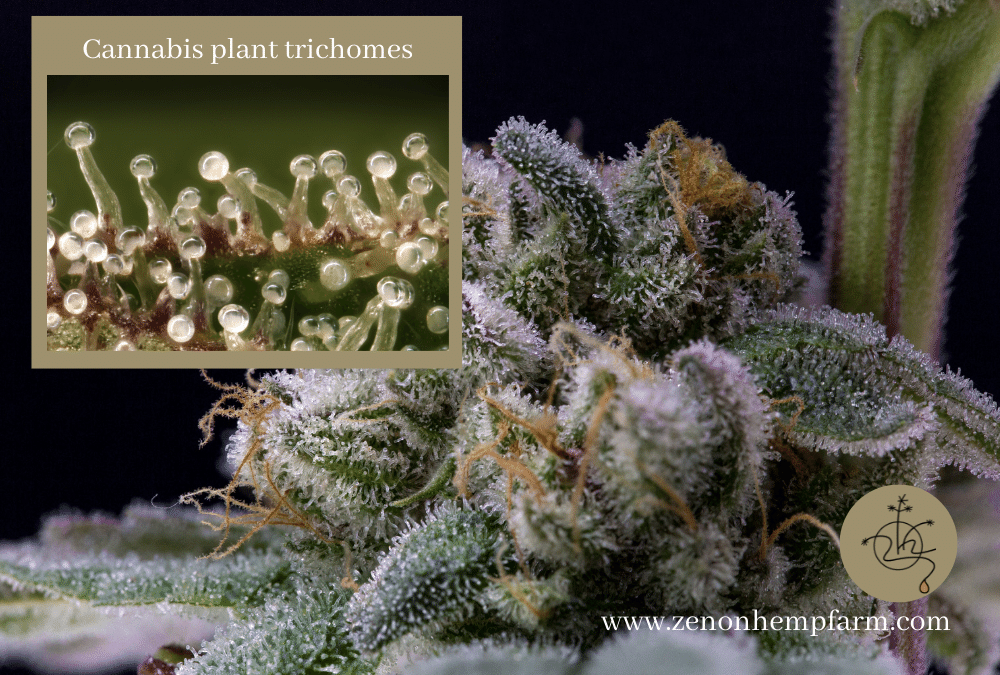 Hemp is a source of CBD and other valuable compounds

Each plant is unique in terms of structure and each part performs a specific function. And in nature it is so perfectly created that it is hard to believe it and imagine it - everything seems to be well thought out. And yes it is. So this time we're going to talk about the trichomes, which are the little fine outgrowths on the cannabis plant.

Why is it important to know about them? This is important for those with an interest in cannabis growing and harvesting as efficiently as possible. And for others - another interesting fact about hemp and its CBD extracts or other valuable CBD products.

As already mentioned, those are tiny outgrowths protruding from the buds and surrounding them on small leaves, the so-called sugar leaves. Trichomes are found in virtually all plants and have an amazing variety of forms and properties. Glandular trichomes arise from the epidermis on the vegetative and reproductive organs and can generally be divided into secretory and non-secretory, the former being capable of secreting substances. 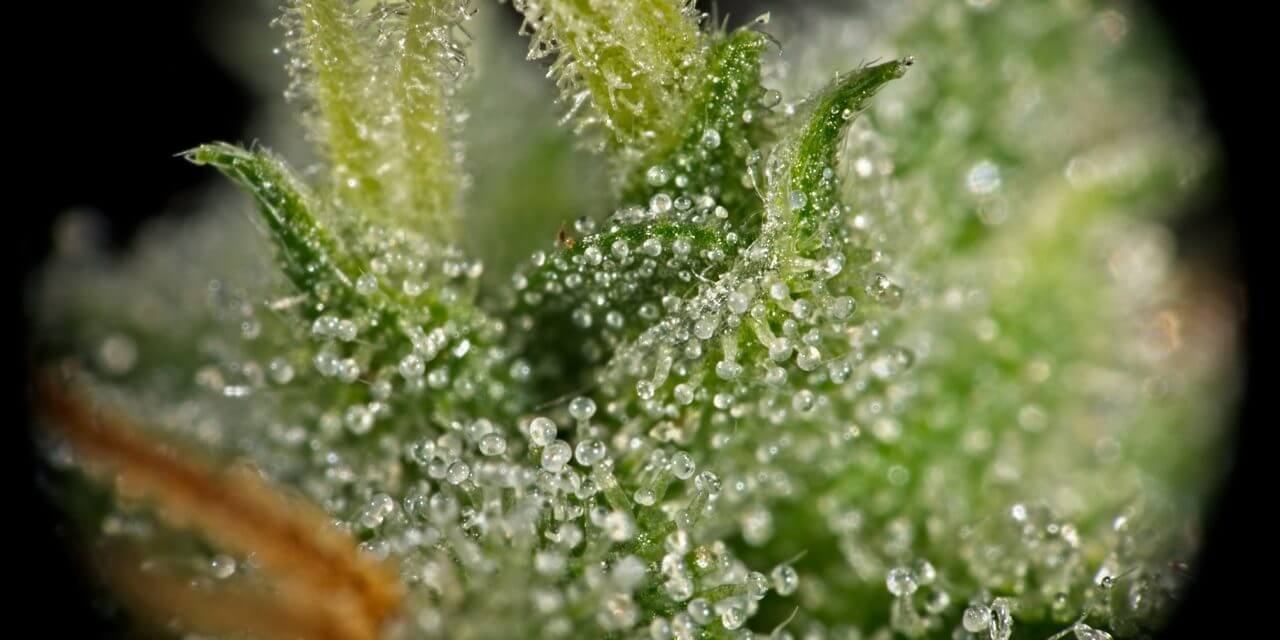 The word trichome comes from the Greek word "tríchōma" which means "hair growth" or "hair". The trichomes can resemble frost on the plant. If you know a bit about the structure of the cannabis plant, this "hair" can be a bit confusing as the other hair-like parts are called pistils, which are also the reproductive organs for catching pollen and fertilizing the plant. But pistils are much larger and visible to the naked eye. Meanwhile, the main purpose of trichomes is to protect cannabis and its buds from negative environmental factors.

There are many different types of trichomes. Some are more common than others, but all play a vital role. First of all, it is necessary to distinguish between glandular and non-glandular trichomes.

Glandular trichomes are the one that produces chemicals inside the gland head on the female cannabis buds. There are three main kinds of trichomes that coat the hemp plant: capitate-stalked trichomes, capitate-sessile trichomes, and bulbous trichomes.

They are between 50 to 100 microns wide (1 mm – 1000 microns). They are the largest trichomes and could be seen by the naked eye. You could see them first when you take a closer look at a high-quality bud. Each capitate-stalked trichome has a relatively long stalk and a huge gland rich in cannabinoids and terpenes rests on its top. This type of trichome produces the most cannabinoids.

They are smaller than capitate-stalked trichomes, medium-sized around 25 to 30 microns in width. Those trichomes have a much shorter stalk. As a result, the gland contains proportionally fewer compounds.

Finally, bulbous trichomes are practically microscopic structures and are only 10-15 microns wide. They don't have a stalk like the first two. However, they coat almost the entire surface of the plant. Although they contain the same type of compounds as the already discussed trichomes, their amount is minimal due to their relatively small capacity.

As you might have guessed, these trichomes are glandless, meaning they don't contain the cannabinoids or other compounds that make trichomes so valuable. However, they still serve many purposes and should not be completely ignored. There are also several types of non-gland trichomes, but we won't go into detail about them in this article.

What is the purpose of the trichomes?

In many cases, trichomes serve more than one purpose. They contain many desirable compounds, often in the form of a resin. Thus, it is the trichomes that play a significant role in the defense of the plant.

Trichomes as a defense against adverse environmental elements

The female cannabis plants in the flowering phase are very fragile and are affected by various factors such as heat, ultraviolet rays, wind, etc. So they pose a risk to the unprotected plant. Meanwhile, trichomes protect the plant from these threats by covering enough plant surface to keep it cool but prevent fungus. They are also biologically adapted to reflect ultraviolet rays. At the same time, the trichomes serve as a protective layer against the wind that can damage the plant structure.

Trichomes as a defense against insects and animals

Another purpose of trichomes is to repel insects or herbivores, some flies and some fungi cannot penetrate the trichome barrier. And terpenes, the chemicals in trichomes, are exactly what various insects and even larger animals hate. Trichomes produce a sour taste and strong aroma, making the plant virtually inedible to most species.
It has been observed that the cannabis plant absorbs almost everything in the soil in which it grows, including chemicals, toxins, and heavy metals. By producing trichomes, the hemp plant essentially produces its own natural pesticide, ensuring the plant lives and reproduces without adding any foreign chemicals.
Protective and deterrent trichomes are mainly non-glandular trichomes. But as we mentioned above, it is important to the cannabis life cycle.

The compounds trichomes produce - cannabinoids - are highly valued in the market

Glandular trichomes are the ones that produce the compounds people look for in cannabis, which are the cannabinoids, terpenes, and other phytochemicals found in the cannabis plant. Yes, you read that right, trichomes are responsible for the production of cannabinoids, the best known of which are THC and CBD, which provide psychoactive and/or medicinal effects. In humans and all animals with an endocannabinoid system, cannabinoids interact with receptors in our central and peripheral nervous systems, as well as systems that regulate sleep, digestion, immune function, mood, and more.
Trichomes are also responsible for terpenoids and flavonoids, two types of compounds that give plants their smell and taste.
Special cells produce terpene and cannabinoid secretions that are stored in the spherical resin gland of the trichome. The exact nature/ratio of cannabinoids and terpenes released depends on the genetics of the original cannabis seeds as well as the environment.

How important are trichomes for cannabis cultivators?

Cannabis cultivators mostly focus on improving the yield of cannabis flowers. However recently appear more knowledge and research analyzing trichomes that can be called "gold mines" and they are a real source of income for a multi-billion dollar industry. Because they contain the most cannabinoids. So it should come as no surprise that in the near future, trichomes will receive special attention.
When it comes to current knowledge related to trichomes, it is important that cultivators understand how trichomes work and in this way, they can significantly improve the quality of the crop.

The life cycle of trichomes

As the cannabis plant grows and develops, so do its trichomes. Gradually, the trichomes produce cannabinoid precursors along with other phytochemicals that help protect the plant. Trichomes develop fastest and visibly during the flowering of the cannabis plant. The developing trichomes change color. They are clear/ transparent at first, gradually become cloudy or milky, and finally amber.
Thus, the first significant changes occur in the third and fourth weeks of the flowering phase. Since then, trichomes need to be closely monitored so that cultivators know when it's the right time to harvest.

How do trichomes help determine the best time to harvest?

Only by observing their color throughout the flowering phase can you know their chemical composition. Skilled cultivators know the exact timing of the bud harvest to ensure maximum cannabinoid content and optimal results.

After a while trichomes turn to a milky color. This development means they now contain higher levels of THC along with terpenes. If cultivators are interested in these particular compounds and want to attribute stimulant properties to the crop, they may soon start thinking about harvesting cannabis buds.

Trichomes remain cloudy or milky for about two weeks. At the end of this stage, they begin to change appearance again, indicating more changes in their phytochemical composition. And at the end of the flowering phase, the trichomes turn an amber color. During this time, they contain slightly less THC and higher CBN. Also known as cannabinol, THC breaks down into CBN with time and exposure to the elements. The amber trichomes indicate that the effects of the plant will be relaxing rather than stimulating. To get this effect, you need to wait until about 50% of the thrichome turns amber.

There is no such consensus among cannabis cultivators about the best time to harvest, so each cultivator decides what traits the plant wants to add to the harvested crop. Harvest also depends on the variety of cannabis, for example, Sativa plants take longer to flower, so cultivator should wait until about 30% of their trichomes turns amber-toned before harvesting.

An interesting fact is that light determines the production of trichomes

By knowing this fact, cannabis cultivators can influence and improve trichome growth and yield.
Cannabis plants have evolved over millions of years, so it makes sense that they have adapted to natural sunlight which stimulates trichomes production. So knowing one more fact - the trichomes serve as a "protective cream" against the sun's ultraviolet rays, so with a higher and more intense light flow, the plant will try to protect itself even more and grow more trichomes.
Such knowledge makes it possible to grow cannabis indoors, with modern LEDs diodes, extracting the spectrum provided by sunlight, thus helping to optimize the level of trichomes.

Production of CBD extracts and concentrates

The production of CBD extracts and concentrates depends entirely on the trichomes in which those compounds are produced. For this, the trichomes are separated from the plant.

Concentrates can be extracted in several ways:

Zenon Hemp Farm uses another dry trichome extraction method not mentioned above where the dry hemp raw material is sieved through a 75-micron sieve. In this way, high-quality trichome raw material is obtained, which consists of as much as 14% CBDA with a low amount of THC cannabinoids (THC up to 0.2%).
Trichome raw material with a high concentration of CBDA is used as an additional ingredient in the production of cosmetics, CBD oil, and food.
Visit the Zenon Hemp Farm online store and buy the highest quality organic hemp products: hemp tea, hemp oil, etc.

Products provided on this site may be illegal in the jurisdiction in which you are located; if so, you are not authorised to use your payment card to complete this transaction. Cardholder's responsibility to know the laws in his or her country of domicile.
Privacy policy